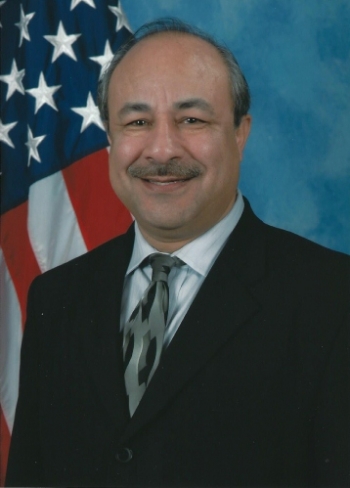 Mr. Johnny Garza was the Chief, Training Support Flight with the 315th Training Squadron at Goodfellow Air Force Base.  He entered the United States Air Force in 1973.  After basic training Mr. Garza attended technical school at Sheppard Air Force Base where he graduated from the C-130 Crew Chief course.   His first assignment was at Davis Monthan AFB.  He was assigned to McChord AFB to do phase inspections on C-130 and C-141 airplanes.  From there, just days before he was going to separate from the Air Force, his previous supervisor from Davis Monthan contacted him and offered him an instructor job teaching C-130 aircraft.  He gladly took the job and began teaching crew chiefs.  After three years, he was moved to the Aircraft Principles course to be an instructor supervisor The throughput was 7,500 students annually.  In 1987, he was cross trained to be a Substance Abuse counselor and moved to Goodfellow AFB. After three years, he moved to Osan Air Base South Korea as a Substance Abuse counselor and Equal Opportunity and Treatment investigator.  He then moved to March Air Force Base in  California and retired on 1 October 1993.

He moved back to San Angelo with his family and worked for the Children’s Advocacy Center doing sexual abuse and severely physically abused investigations.  After three years of doing this, he was offered a position as a Civilian Substance Abuse counselor at the 17th Medical Group.  It did not take long for his job to be changed and he became the first AETC Drug Demand Reduction Manager.  His primary focus was to teach substance abuse prevention classes to local schools and he quickly started teaching classes in surrounding towns.

In 2006, Mr. Garza was promoted to a GS-13 position and became the Chief, Training Support Flight for the 315th Training Squadron.  He stayed in this position until 2008 when he was management reassigned to the 17 Training Group to be the Chief, Plans and Programs Flight where he managed the Training Group’s $43.5M budget as well as all Training Group contracts, facilities, manpower, equipment and systems.

He was handpicked by AETC to augment 22 separate Inspector General inspections for all of the AETC bases.  He brought his knowledge to the 17th Training Group and provided guidance during six AETC Consolidated Unit Inspections with squadrons being evaluated with “Excellent” and “Outstanding” ratings.

He retired after a 20 year military career and a 20 year civil service career in January 2016.  He spends his time traveling with his wife Patricia, playing golf and volunteering at MFTE.